About She
Sends Collective

Welcome to She Sends Collective

She Sends Collective fosters space for femininity in a sport dominated by the masculine by way of access, education, inclusivity and community. It is our goal to help women + GNC humans ‘send’ whatever they set their intentions on, climbing related or not. We view you first as a human, second as a climber.

While climbing is the thing that unites us, we strive to be more than climbing.

With this in mind, you can expect to find workshops centered around nutrition, self-love and mindfulness in addition to our climbing-centered offerings. We believe that if we have a stronger relationship with ourselves, food, and our minds then we will perform better on the wall, decrease our risk for injury and therefore extend our longevity within this special sport.

We recognize that there are a lot of financial barriers to obtaining a climbing coach, nutritionist and mindset coach, in addition to our basic needs and supporting our hobby at the most basic level. This is why you will notice that we provide scholarships and offer flexible rates for many of our programs. We are notably the first organization in the industry to offer flexible payment rates for guided outdoor climbing clinics, so don’t forget to check that out!

While our in-person events are reserved for women (cis + trans) and gender non-conforming humans, everybody is welcome to join remote masterclasses or 1:1 remote coaching programs.

My name is Chelsea.

I started climbing in 1998 as a little girl with blonde pigtails and a big cheesy smile on my face. I fell in love with climbing immediately, and it remains my truest “love at first sight” experience.

I participated (and won) my first climbing competition within a month of being introduced to the sport and continued competing until 2014. During that time I was crowned National Champion, stood on both National and International podiums, and spent 10+ years as a member of the US National Team, where I competed abroad representing the US on the World stage. Eventually, I retired from competing to explore my potential on rock, focus on coaching more and experience other facets of climbing.

While competition was my main focus as a kid, I still made time to explore the outdoors. My first big wall experiences were at ages 15 and 16 when I made a 34 hour ascent of The Nose of El Cap and a 24 hour ascent of the Direct NW Face of Half Dome with Hans Florine. This experience truly ignited my passion for adventure.

I’m a boulderer and sport climber at heart. There’s something special about trying hard, having the curiosity to unlock beta, and ‘swimming’ in flow state. I excel at onsight climbing (doing things on the first go without beta) and some of my notable onsights include The Madness (5.13c) in Red River Gorge, KY; Encore (5.13c) in Ceuse, France; Pushin’ Up Daisies (5.13c) in Red River Gorge, KY; and Sex After Death (V8) in Hueco Tanks, TX. 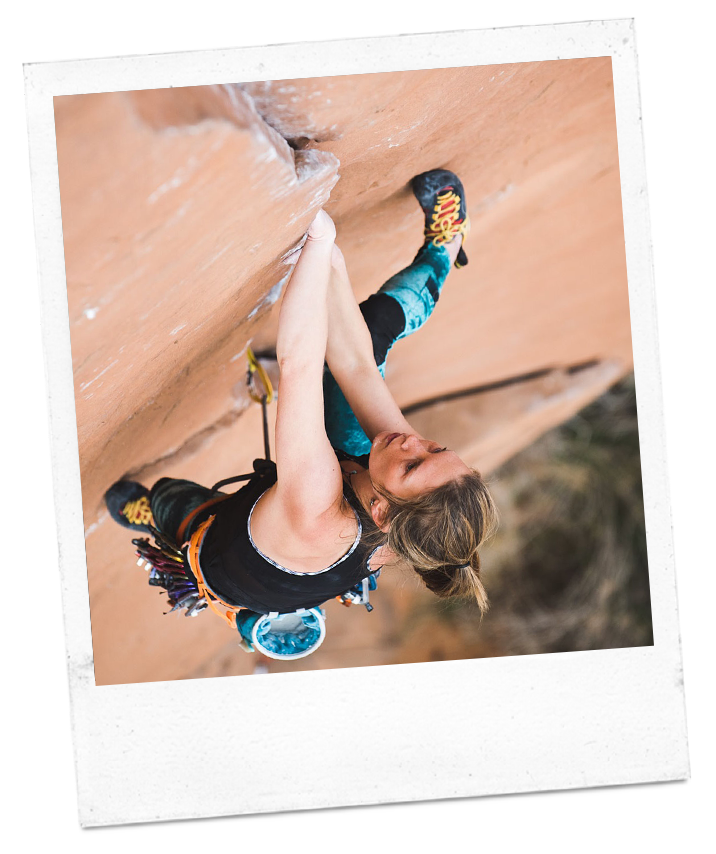 I actually began coaching in 2004, fresh outta highschool. My first coaching gig was a head coach position of a youth team in Atlanta, GA. This is where my passion for helping others along their climbing journeys began. After a couple of years, I moved to Boulder, CO, where I eventually became the Head Coach of Movement Climbing + Fitness’s youth climbing team after coaching them for 6 months under the tutelage of Justen Sjong. During my time at Movement, I became the first female US Team Coach and held this role for 4 years before deciding to focus on coaching women in 2014.

It was at this time that I started traveling the country to teach at various outdoor festivals (AAC’s Craggin’ Classics, Flash Foxy, and the International Climbers Fest) and gyms across the country to coach women-only technique and strength training clinics. I loved what I was doing, but I knew I wanted to do more – specifically to hold space for the community and strengthen it by educating women to become self-sufficient and empowered along their climbing journeys.

In 2020, She Sends Collective was born to take this dream through to fruition. 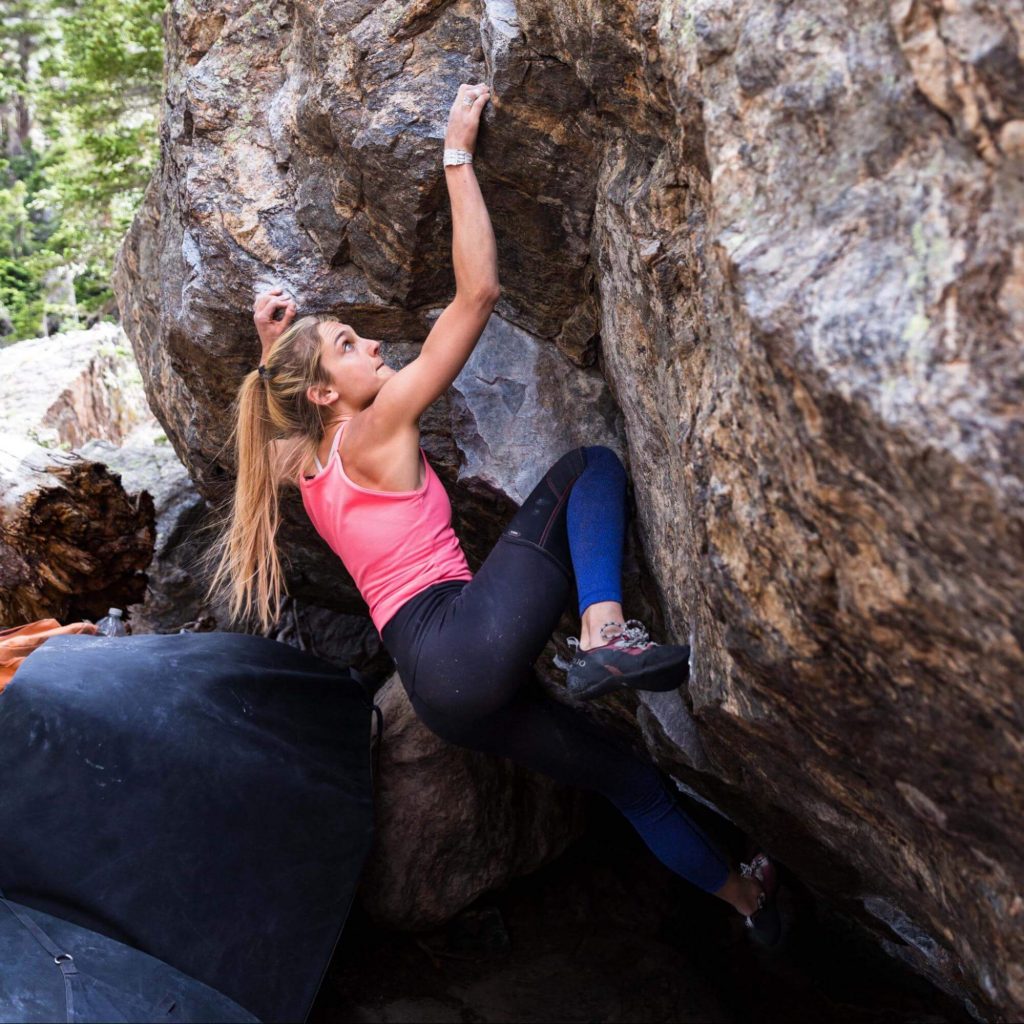 Liz started climbing in the fall of 2013 when she joined her college’s club climbing team on a whim and has been hooked ever since. After discovering outdoor bouldering that same fall and sport climbing the next spring, she began prioritizing outdoor climbing and has climbed outside year-round since moving to Boulder, Colorado, in 2017.

Liz has bouldered up to V9, sport climbed up to 5.13b, and sent 5.12a on gear. She now lives in her van chasing fall-esque temps around the country and working on the road. 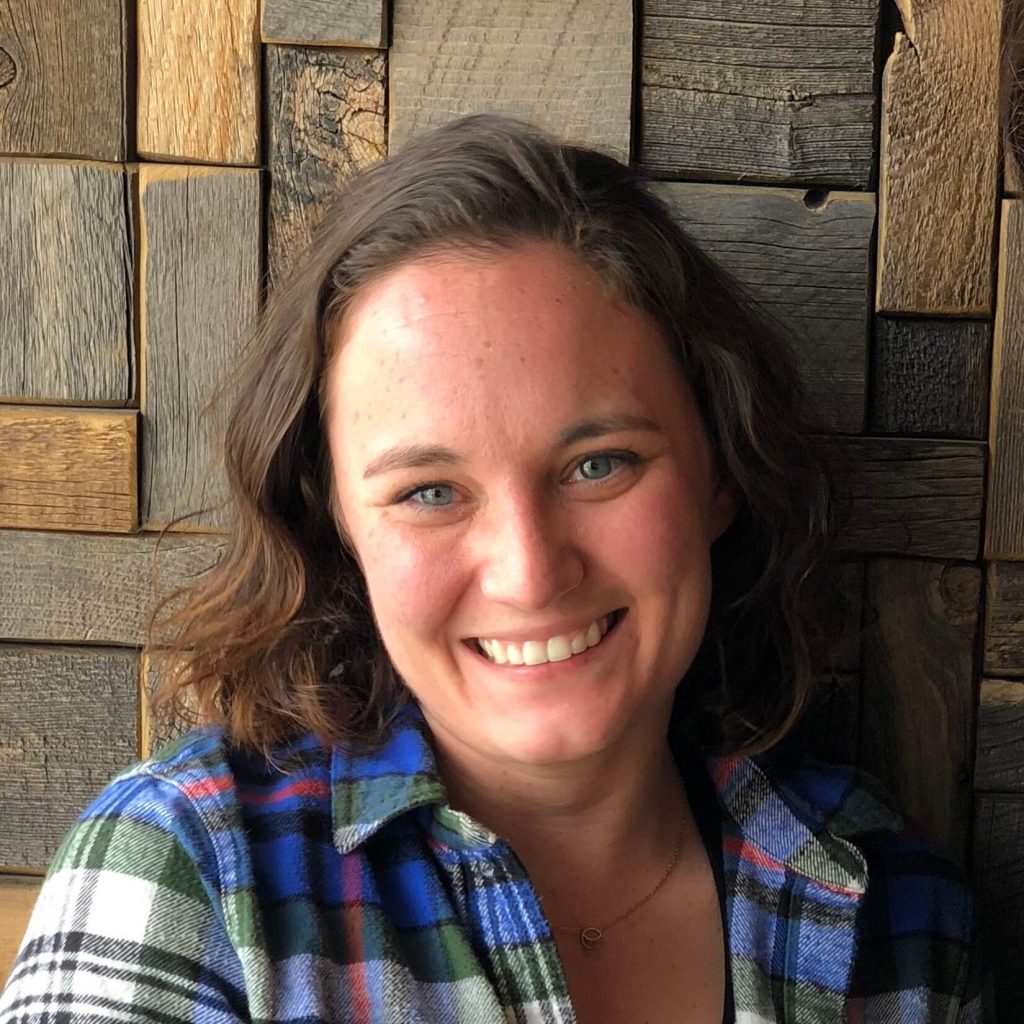 Laurel first climbed outdoors in college and rediscovered her love for sport climbing after moving to Colorado in 2013. With a background in ecology and trauma-informed yoga, Laurel is working on her Master’s in Mental Health Counseling and is passionate about exploring the intersection of mental health and climbing.

She works with SSC because she believes in creating safe, accessible spaces for new climbers to learn outdoor skills and make meaningful connections.

@shesends_collective
It's been a busy summer and we aren't slowing down

As the sport of climbing continues to grow in popu

She Sends + @adidasterrex believe everyone should

Stay up to date with the She Sends Community